AN INVESTIGATION INTO THE CORRELATION BETWEEN SPECIFIC GENETIC
MUTATIONS AND COLISTIN RESISTANCE IN ESCHERICHIA COLI.

Abstract
Prior to the discovery of the plasmid-borne mcr-1 gene (1), resistance to the antibiotic colisitin was limited to chromosomal mechanisms. The

To better understand chromosomally-mediated colistin resistance versus plasmid-mediated resistance, the chromosomal gene phoP was deleted from an E. coli ATCC 25922 control strain. Deletion of phoP, a regulatory gene associated with bacterial chromosomal colistin resistance, was achieved by Lambda Red Recombination (2). This method involved restriction enzyme excision of phoP, replacing it with an antibiotic resistance cassette which was then subsequently removed. This created a phoP negative mutant control strain. The minimum inhibitory concentration (MIC) of the wild type and mutant control strains, as well as six test E. coli isolates, to colistin was then investigated using microbroth dilution.

Successful deletion of phoP from the mutant strain was demonstrated by polymerase chain reaction amplification of the target gene in both the wild type and mutant strains, and electrophoresis of the amplicons. The MIC studies illustrated a significant one-fold increase in the MIC of colistin from the wild type to the mutant control strain (0.125mg/l versus 0.25mg/l). Furthermore, colistin-resistant E. coli test isolates lacking mcr-1 exhibited a colistin MIC double that of colistin-resistant test isolates with mcr-1 (8mg/l versus 4mg/l).

AN INVESTIGATION OF THE EFFECT OF SFV INFECTION ON P32 LEVELS
AND DISTRIBUTION IN BHK CELLS. 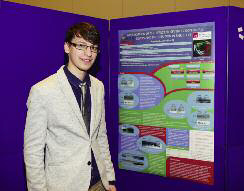 The cellular protein p32 has been shown to have many possible functions within the cell. It is believed that one of these functions involves binding to the capsid protein of Semliki Forest Virus (SFV); an interaction that may provide a greater understanding of both SFV replication and p32 involvement in the cell.

Here we show that SFV infection affects levels of p32 and its distribution within the cell. A cell fractionation procedure, known as the Rapid, Efficient And Practical (REAP) method, was utilised to separate the cytosolic components from the nuclear components. From these fractions it was established, employing Western Blot analysis, that SFV has a significant effect on p32 altering its distribution between the nucleus and the cytosol of infected BHK-21 cells. Additionally, examination of viral lysates revealed that p32 is present in SFV mutant virions .The interaction between the SFV capsid protein and p32 was determined to be discrete from the interaction between the Rubella capsid protein and p32.

The results of this study demonstrate that while much is still to be understood about p32, it has an important role to play in SFV infection in a role that is only now being uncovered.

Abstract
LLETZ is a standard technique employed for both diagnosis and

treatment of cervical malignancy and premalignant states. This study aims to obtain scientific evidence in support of the NHSCSP recommendation to remove 80% of LLETZ specimens in a single fragment. Relationships between LLETZ fragmentation and the ability to accurately assess LLETZ margins, the proportion of endocervical margin involvement and the punch biopsy-LLETZ agreement will be investigated. Relationships between patient age and LLETZ fragmentation and the acetowhite grade and the grade of the subsequent punch biopsy will also be studied.

Interpretable margins were observed in 96.99% of intact LLETZ compared to 73.36% of fragmented specimens (p < 0.0001 at α = 0.05). Endocervical margin involvement was most frequent when the LLETZ was removed in 3 or more fragments. No statistically significant relationship was observed between LLETZ fragmentation and biopsy-LLETZ agreement or patient age.

It was concluded that the NHSCSP recommendation for LLETZ removal is supported by scientific evidence. The most clinically significant finding demonstrated was the negative impact of  LLETZ fragmentation on reliable margin interpretation and endocervical margin involvement, and therefore on patient management. 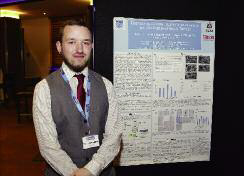 which does not accurately resemble cell-cell and cell-matrix interactions in vivo. This has led to the development of 3D culture methods which provide a more accurate model by allowing these interactions. Recently a gelatin based 3D method has been
developed for the ex vivo culture of breast tumour; however gelatin poorly resembles the biological microenvironment.

The overall aim of this research is to develop a collagen based scaffold to more accurately resemble the biological microenvironment for the advanced ex vivo culture of breast tumour. This was achieved by fabricating (i) 0.5% collagen (ii) 0.5% collagen + 0.1% gelatin (iii) 0.5% collagen + 0.25% gelatin
scaffolds using freeze drying methods. These scaffolds along with a commercial gelatin scaffold (Spongostan) and a collagen scaffold that received dehydrothemal (DHT) treatment were characterised by their structural properties using porosity measurements and scanning electron microscopy (SEM) followed by degradation and mechanical properties. Frozen patient tumours were grown on the scaffolds which exhibited the best characteristics. Fresh xenograft tumours were grown on selected scaffolds and scaffolds with a fibronectin coating to tailor a more specific environment. Cultured tumours and tumours before culture were stained with haematoxylin and eosin (H&E) for morphology and Ki67 to measure proliferation.

It was found that all fabricated scaffolds exhibited better structural, mechanical and degradation properties than Spongostan. H&E staining revealed frozen tumours did not survive in culture and that fresh tumours maintained their morphology after culture. Ki67 staining revealed the optimal scaffold for advanced ex vivo culture of breast tumour was the 0.5 % collagen + 0.1% gelatin group as it provided a 71% proliferation rate. It was also found the addition of fibronectin has the potential to offer a more specific environment in some scaffold groups.

INVESTIGATION OF RMRP EXPRESSION IN RESPONSE TO TESTOSTERONE
WITH RESPECT TO FAMILIAL PARTIAL LIPODYSTROPHY 2.

inherited condition characterised by mutations in LMNA, a gene which encodes A-type lamins that are involved in the formation of the nuclear lamina.

Unpublished RNA-sequencing (RNA-Seq) data in this lab has found that the levels of approximately 250 genes are altered in 3T3-L1 cells expressing mutant LMNA; the activity of the RNase mitochondrial RNA processing (RMRP) gene is repressed the most, relative to its activity in 3T3-L1 cells with wild-type LMNA. The RNA-Seq analysis also demonstrated that treatment of 3T3-L1 cells with testosterone significantly alters adipocyte gene expression. In this study, two segments of the murine RMRP promoter region were successfully amplified by PCR and cloned into the pGLucbasic (PiggyBac) luciferase reporter vector. The smaller of these amplicons, an 833bp segment of the RMRP promoter, was sequenced and was unexpectedly found to be a highly active promoter upon transfection into 3T3-NIH fibroblasts.

Treatment of transfected cells with testosterone was shown to have no effect on the activity of the RMRP 833bp promoter segment; these findings are not consistent with the RNA-Seq data which demonstrated testosterone to strongly inhibit RMRP expression. Additionally, the effect of testosterone on the levels of RMRP transcript in 3T3-L1 murine preadipocytes was examined using real-time PCR and transcript levels were demonstrated to be largely unaffected, again contrasting RNA-Seq findings. Nevertheless, this study presents opportunities for a more detailed investigation into the effect of testosterone on the activity of the promoter region and RMRP expression for future studies. More investigation is required to explore the potential of testosterone as a therapeutic agent against FPLD2