The winner of this year’s President’s Prize 2018 was Hayley Foy-Stones. Hayley was awarded this prize for her work on the association of the 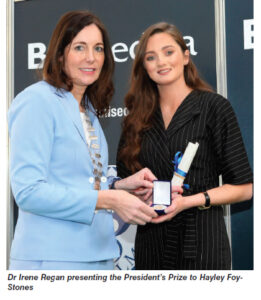 Human Papillomavirus (HPV) with P16INK4a in head and neck cancer. Hayley is a student of Galway Mayo Institute of Technology and was supported by the Department of Histopathology Midland Regional Hospital Tullamore. She will represent Ireland at the Student Forum at the European Association for Professionals in Biomedical Science (EPBS) Conference in October.
HPV vaccination is usually associated with the protection of young women against cervical cancer. Hayley very elegantly demonstrated a very different link and suggested that there is a need for a prevalence study and for vaccination of both males and females in order to reduce HPV-associated oropharyngeal cancers for future generations.
Hayley and the other five students who presented their projects at this BioMedica2018 can be justly proud of their achievements. There was a very high standard of both project and presentation. The Dodder A room in the RDS was packed with students and lecturers from the various colleges as well as other interested Biomedica delegates. There was much good humoured energy and excitement in the room with so many excited young people supporting their peers.
Anne Mac Lellan 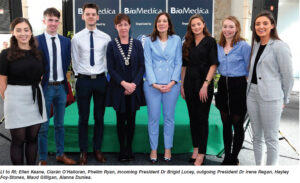 CIRP As A Therapeutic Vaccination Platform Against Cancer

The approval of immune checkpoint inhibitors (ICIs) was a major development in the treatment of certain cancers. However, response to ICI treatment is linked to high numbers of tumour infiltrating T-cells which are not always present(1). Therefore, it is of interest to produce a therapeutic vaccination capable of stimulating tumour infiltrating T-cells in order to maximise effectiveness of ICIs.

This study explored the production of a therapeutic vaccination platform based on cold-inducible RNA binding protein (CIRP), an endogenous TLR4 ligand capable of eliciting a targeted immune response when fused to tumour antigen. CIRP-linked constructs were cloned in bacterial vectors. The protein constructs were then produced and purified via affinity chromatography. Immunogenicity was tested in vivo by Enzyme-Linked ImmunoSpot (ELISPOT).

Five separate CIRP-linked constructs were successfully cloned. Two of these constructs (OVA-CIRP and Spy-CIRP) were selected for protein production and purification. The immunogenicity of the OVA-CIRP product was tested in vivo, however, no statistically significant response was observed when compared to the OVA antigen alone. Overcoming limitations in purity in future studies may improve immunogenicity of OVA-CIRP.

Additionally, the effectiveness of a previously established construct SIIN-CIRP was tested in combination with ICIs (anti­CTLA4 and anti-PD1) against tumours in murine subjects. Tumour volume and survival rates were measured over 56 days.

Further study is warranted to fully appreciate the potential of CIRP in combination therapy. However, its ability to be combined with tumour antigen and elicit an immune response remains promising.

Introduction: The Human Papillomavirus (HPV) has emerged from anonymity as a carcinogenic agent in head and neck squamous cell carcinomas (HNSCCs). This sexually transmitted virus principally targets the oropharynx, which has recently led Ireland’s department of health to
consider extending the HPV vaccine to Irish men.(1) There is no gold standard for HPV testing, but HPV in situ hybridization (ISH) is employed to directly detect HPV DNA.(2) The over expression of the tumour suppressor protein p16INK4a is detected using p16INK4a immunohistochemistry (IHC), which indirectly represents the presence of HPV.(3)

Conclusion: The correlation between HPV and p16INK4a in the thirty-five HNSCC cases highlights that p16INK4a IHC shows potential as a screening tool that would prompt HPV ISH testing in oropharyngeal cancers cases. The link between HPV and p16INK4a in cancers of the oropharynx should be highlighted to all health care systems throughout Ireland to promote routine histopathology testing. This would allow prevalence statistics to be generated and reinforce the importance of vaccinating both males and females to reduce HPV-associated oropharyngeal cancers for future generations.

In bacteria, persister cells represent a subset of cells within a population that have the ability to survive potentially lethal stresses including antibiotic treatment. Current dogma suggests that the slow growing or dormant nature of persister cells enables them to avoid antibiotic killing while the majority of the cell population is killed (1). The clinical relevance of bacterial persistence lies with the contribution of these cells to antibiotic failure and the recurrence of infections.

The aim of this study was to investigate the relationship between metabolism and persister cell formation in Escherichia coli HM605, a colonic mucosal isolate associated with Crohn’s disease. During antibiotic stress, metabolism plays a central role in establishing and maintaining a persister state (2). The level of persister formation in E. coli HM605 was assessed using a gentamicin persistence assay (3). Persistence of HM605 was found to be enhanced in the presence of glucose. High performance liquid chromatography analysis revealed the production of various organic acids by persister cells under antibiotic stress. Using mutants defective in the production of specific organic acids it was shown that the production of acetate, a byproduct of glucose metabolism, was not required for persister formation in E. coli HM605.

Optimisation of Recombinant GP41 Protein For Use In HIV Diagnostic Assay

Human Immunodeficiency Virus (HIV) has been long established as the causative agent for Acquired Immune Deficiency Syndrome (AIDS). Recommendations are that initial testing for HIV should be carried out using an antigen/antibody combination immunoassay, such as an enzyme-linked immunosorbent assay (ELISA) (1). The project objective was to assess the functionality of two variants of the reference recombinant HIV protein Gp41 used in a commercial ELISA kit; a wild-type variant with a poly-His tag fused to its C-terminus and a mutant variant without cysteines produced using splicing by overlap extension PCR.

High-throughput cloning and transformation methods were used to establish the optimal expression vectors for both constructs via expression screening (2). The best expression vectors, determined by SDS-PAGE and Western Blot analysis, were selected for large-scale expression testing. The protein was purified by Immobilised Metal Affinity Chromatography (IMAC) (3). The wild-type and mutant protein products were biotinylated and their reactivity assessed in ELISA.

The purpose of the current study was to establish the potential degree of discrepancy associated with each of these three methods and their respective interpretive breakpoint guidelines, for six oral antimicrobial agents commonly used to treat urinary tract infection, namely ampicillin, amoxicillin-clavulanate, trimethoprim, ciprofloxacin, nitrofurantoin and cephradine/cephalexin.

A total of 100 uropathogenic Escherichia coli isolates obtained from boric acid-treated urine samples of GP patients were investigated. For the EUCAST and CLSI testing, the Kirby-Bauer method of disk diffusion and associated interpretive guidelines was employed. For the Stokes method, direct susceptibility testing was performed on the urine samples, and results were interpreted using the Stokes guidelines.

Our novel data indicate that the discrepancies generated through using different AST methods and different interpretive guidelines may result in confusion and inaccuracies when prescribing treatment for urinary tract infection. These results also show that care should be taken to compare susceptibility test data between studies only when the same method has been used in each case.

Clostridium difficile infection (CDI) is the leading cause of infectious nosocomial diarrhoea. The organism’s virulence is related to its toxin production. The laboratory must differentiate between non-toxigenic and toxigenic strains of C. difficile (Polage et al, 2016). C. difficile AST is essential for the monitoring of emerging resistance. C. difficile AST provides invaluable epidemiological data relating to ribotype prevalence (Solomon et al, 2011). A total of 26 tcdB positive stools were tested for the presence of detectable toxin using an EIA.

Patients were divided into EIA toxin positive and EIA toxin negative groups. The white cell count (WCC), CRP value and length of stay (LOS) were recorded for each patient. The Bristol Stool Chart (BSC) score was also used to describe stools submitted in both groups. Antimicrobial susceptibility testing (AST) was performed on 27 isolates in accordance with bioMérioux Etest® guidelines. Ribotype data was available for 25 of these isolates. CLSI breakpoints were followed for the antibiotics used in the study (metronidazole, clindamycin and moxifloxacin).

Study findings, showed that the WCC (U=11.5), Ct value(U=36) and BSC score (U=44) were statistically higher in the EIA toxin positive group. The CRP (U=48.5) and LOS (34.5) were not statistically higher in the EIA toxin positive group. AST results demonstrated all isolates were susceptible to metronidazole. Clindamycin resistance appeared to be associated with ribotype prevalence. In conclusion, the introduction of a second-step EIA test for tcdB positive stools was useful for identifying those with CDI. The reliability of metronidazole as the drug of choice for CDI was reaffirmed. The study provided further insight into the relationship between broad-spectrum antibiotic susceptibility and ribotype prevalence.